One of the very strong assertions of evolutionists is that millions of years ago certain types of dinosaur evolved into the birds we have today.  A recent BBC programme Walking with Dinosaurs proclaimed that when we look at birds we can see and hear dinosaurs. But very recently this view has been seriously challenged. A vital difference between dinosaur and bird structure means that one could not have evolved into the other.

Reptiles, along with mammals like us, have a lung that acts like a bellows—the air is sucked in, then the stale air is breathed out the same way it came in. Birds’ lungs are different: the air is breathed into a complicated system of air sacs, even involving their hollow bones. This system keeps air flowing in one direction through special tubes making it a continuous rather than an intermittent in-and-out process. 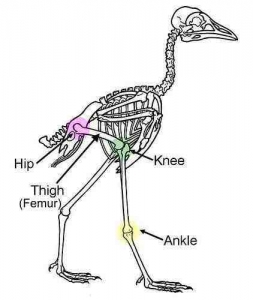 Recent research shows that a bird’s ability to breathe depends on its femur (upper leg bone; see picture). Unlike other walking creatures, a bird’s femur does not move significantly.  Instead, the bird bends only the lower portion of its leg when walking or running. This “knee running” anatomy, with nearly fixed femur bones and musculature, is crucial in preventing a bird’s air-sac lung from collapsing whenever the bird takes a breath.

This essential feature is explained in the June 2009 issue of the Journal of Morphology, where biologists Devon E. Quick and John A. Ruben say:

“One of the primary reasons many scientists kept pointing to birds as having descended from dinosaurs was similarities in their lungs. However, theropod dinosaurs had a moving femur and therefore could not have had a lung that worked like that in birds. Their abdominal air sac, if they had one, would have collapsed. That undercuts a critical piece of supporting evidence for the dinosaur-bird link … It’s really strange that no one realised this before. The position of the thigh bone and muscles in birds is critical to their lung function, which in turn is what gives them enough lung capacity for flight.”

“It’s really kind of amazing that after centuries of studying birds and flight we still didn’t understand a basic aspect of bird biology.”

His further comment highlights one of the main problems in getting such information across—the vested interests of many biologists. He says:

“Frankly, there’s a lot of museum politics involved in this, a lot of careers committed to a particular point of view even if new scientific evidence raises questions.”

In contrast there is a simple yet profound Scriptural explanation of the origin of birds, along with all other creatures:

“So God created the great creatures of the sea and every living and moving thing with which the water teems, according to their kinds, and every winged bird according to its kind. And God saw that it was good” (Gen. 1.21, NIV).