Fountains of the deep

As recently reported on BBC News (http://www.bbc.co.uk/news/science-environment-26553115) and in the journal Nature, minerals preserved in diamond and brought to the surface by volcanic eruptions have revealed hints of the bright blue rocks that exist deep within the Earth. They also provide the first direct evidence that there may be as much water trapped in those rocks as there is in all the oceans. 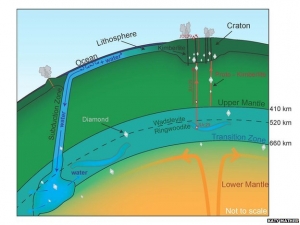 The diamonds contain a blue mineral, ringwoodite, that is only thought to form between 410km and 660km beneath the Earth’s surface, showing just how deep some diamonds originate. R
esearchers found that the mineral contains about 1% water. While this sounds like very little.  But because ringwoodite makes up almost all of this immense portion of the deep Earth, it adds up to a huge amount of deep water.

Commenting on this find, Prof Joseph Smyth of the University of Colorado said:

“I think it’s stunning! It implies that the (earth’s) interior may store several times the amount of water in the oceans.”

Given the new findings of ringwoodite’s water-bearing capabilities, its abundance at depth, and its beautiful hue, the term “blue planet” seems even more appropriate for Earth!

What was not reported in on the BBC News was that the Bible seems to confirm this discovery.

The account of the Flood at the time of Noah describes where all the water came from:

“On that day all the springs of the great deep burst forth, and the floodgates of the heavens were opened.”  Genesis 7:11 NIV)

Then the Bible account adds that after the Flood:

“the springs of the deep and the floodgates of heaven had been closed, and the rain had stopped falling from the sky.” (Genesis 8:2 NIV)

Since that time, as God promised, there has not been such a devastating Flood again.  That’s because:

“(God)…fixed securely the fountains of the deep…so that the waters would not overstep his command” (Proverbs 8:28-9 NIV)

It seems highly likely that the discovery of ringwoodite in diamonds, and its underground store of water, may have revealed the true meaning of what the Bible writers called “the fountains of the deep”. That’s something they could not have known about if the Bible wasn’t divinely inspired.