A man for the moment

There is no questioning the fact, Nelson Mandela was an exceptional man. He was willing to sacrifice 27 years of his life in prison to achieve his objective – freedom from the bondage of the apartheid regime.

He was indeed ‘a man for the moment’, capable of changing the course of history, not just in his own country but across the world. Like Martin Luther King before him, he stood up for the things he knew were right…and paid a heavy penalty.

There have been other significant moments down the ages when men and women with vision have changed the course of history. Like the rudders on ships, even the largest things can be moved by the efforts of just a few people.

But sometimes this re-direction of history can take the world towards disaster, as in the period when Hitler took power!

As that quote from the Telegraph reminds us, Moses was another ‘man for the moment’, leading his own nation towards freedom. Unwilling at first and lacking confidence in his own abilities, he made mistakes early in his life, even killing a man and having to flee for his life from Egypt.

But when the moment came for courage and perseverance he rose to the challenge. Even then, as the Bible records, it was God who brought the Israelites out of Egypt – not Moses. He was simply a ‘tool’ in God’s hands to bring about his purpose. Like Mandela, King, Churchill and even Hitler, it is often God’s hand that can be seen at work, changing the course of history. 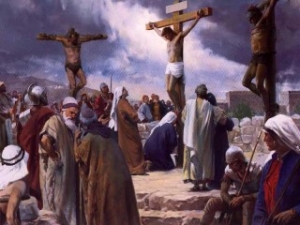 Ultimately, however, there has only ever been one ‘man for the moment’ who has so profoundly changed both history and our future!

Throughout his life Jesus Christ was conscious of his ‘role’, to be the way God wanted to do away with sin and death, eventually for ever. But to do this he had to sacrifice his own life.

Surely that’s ‘a man for the moment’ worthy of our closest attention and our greatest respect?