Most of us know that the white cells in the blood are the first line defence against invading bacteria and viruses. They rapidly detect and go to the site of infection, and engulf or otherwise neutralise the dangerous invader, often passing out of the blood vessel to get to the affected tissue 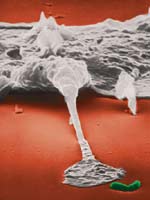 One way the white cells do this is quite well-known. The cell can detect the presence of an alien body in the blood stream, approaches within a short distance from it and then sends out a finger that engulfs the bacterium and then “eats” it (see picture).

What has not been known until very recently is how the white cell manages to get to the site of infection against the rather rapid flow of blood in the blood vessels, and how it knows where to cross the blood cell wall to reach the underlying damaged tissues. It was once thought that the cell moved by flattening itself against the vessel wall, then attaching its front portion, folding itself, then bringing up the rear portion before the front moving forward again.

What has been discovered in the last year at the Weizmann Institute’s Immunology Department is that the cells develop many tiny “legs”, only about one thousandth of a millimetre long. At their tips these have special molecules that attach themselves to similar molecules in the cell wall which enable them to “dig” themselves into the cell wall, thus preventing them being washed away by the blood flow. 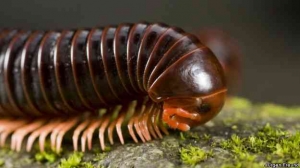 These legs attach and detach in sequence within seconds – allowing them to move rapidly while keeping a good grip on the vessel’s sides. To make an analogy with a larger creature, the blood cell moves in a similar way to the multi-legged millipede.

By keeping such close contact, cells are able to detect the point where there is underlying tissue damage and migrate through the wall to effect a repair. Thus the tiny legs are used for gripping, moving and sensing distress signals from the damaged tissue.

Is it reasonable to suggest that such sophisticated structures and specific functions could have just happened by accident?

Design by a wise Creator is the only logical explanation.