Scientists have discovered a Pacific fish that has eyes that use mirrors as well as lenses to help it see in the murky ocean depths. The brown snout spookfish has been known for many years, but no live specimen had been captured until last year, when one was caught off Tonga, a string of islands 1,500 miles north-east of New Zealand.

Very little light penetrates beneath about 1000 metres of water and like many other deep-sea fish the spookfish is able to make the most of what little light there is. This fish, 15 cm long, lives at depths of up to 2,500 m and is the first vertebrate known to have mirrors to focus light into its eyes. 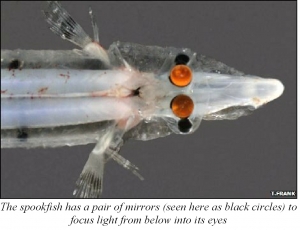 Whilst the spookfish appears to have four eyes, technically it has only two, each of which is split into two connected parts. One half of each eye points upwards, to capture the very faint glimmers of light from the sea surface far above. The other half, which looks like a bump on the side of the fish’s head, points downwards.

All known vertebrates (animals with backbones) with eyes use a lens to divert the path of incoming light and focus it on the retina. The spookfish’s upward-pointing eye works in this normal way. But the downward-facing eye differs in that it uses a mirror instead of a lens to form an image and focus it onto the retina. As far as is currently known, these two-directional eyes are unique among vertebrates.

In these dark depths the spookfish utilises flashes of bioluminescent light that come from other creatures. The downward-facing mirror eyes form images of these flashes, warning the spookfish of other creatures that are active, yet otherwise unseen, below its vulnerable belly.

Each mirror is made up of tiny plates, probably of guanine crystals, arranged into a multi-layer stack. The scientists who made the discovery developed a computer simulation showing that the precise orientation of the plates within the mirror’s curved surface is perfect for focusing reflected light on to the retina of the fish. In their report they comment:

“The use of a single mirror has a distinct advantage over a lens in its potential to produce bright, high-contrast images. That must give the fish a great advantage in the deep sea, where the ability to spot even the dimmest and briefest of lights can mean the difference between eating and being eaten.”

“There’s a kind of very unique micro-assembly going on”.

And who or what was responsible for this extraordinary example of micro-engineering? Could it be by chance, as the evolutionists believe? How much better to echo Nehemiah’s prayer to God: