For many years the coelacanth fish (pronounced seal-a-canth) was claimed to be the missing link between sea creatures and land creatures. This was because it could only be found in the fossil record and its bony fins were supposedly the first stage in the growth of limbs suitable for living on land. 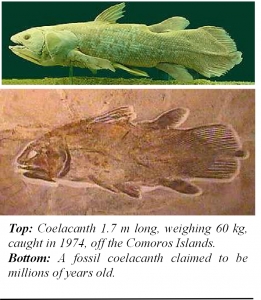 Coelacanths are remarkable fish with many special design features. They have an electro-receptive device called a rostral organ in the front of the skull, which helps in prey detection and balance. Their eyes have many more “rods” than “cones” in the retina, enabling them to see well in dim light. They can swim head down, backwards or belly up to locate their prey, aided by the rostral organ. They rest in deep caves during the day and hunt in more shallow water by night. They can slow down their metabolism at will, into a sort of hibernation mode, when they move to very deep water, up to 700 m (2300 ft). These are merely the special features of a life form that was quite obviously designed. Design requires a Designer.

The coelacanth raises many important questions. If evolution is true, why has there been no change from the fossil specimens (allegedly 80 million years old) to modern specimens? Why do evolutionists still cling to “old-age” theories with this new evidence? How were the fossil specimens buried so quickly that no predator had time to devour them? Surely answers may be found in the Biblical accounts creation and Noah’s flood, but evolutionists have never wanted to embrace such Biblical ideas. A noted evolutionist, R. Lewontin, wrote:

“Scientists are committed to materialistic explanations … for we cannot allow a Divine foot in the door.”

The coelacanth is just one of hundreds of “living fossils” now known in the plant and animal kingdoms. Some of these are the dawn redwoods, gingko trees, horseshoe crabs and tuatara lizards.

Charles Darwin was the first to coin the term “living fossils” and (concerning the Australian platypus and lepidosiren) he wrote:

“These anomalous forms may almost be called living fossils; they have endured to the present day, from having inhabited a confined area and from having thus been exposed to less severe competition.”

Alternatively we could say: “…they have endured to the present day so that God can present an enormous hurdle to Charles Darwin and his disciples.”

Not enough people are aware of the inconsistencies of modern evolution theorists. Just ask yourself and those who believe in evolution:

“Why did the coelacanth not change for 80 million years?” and, “Why do evolutionists ignore newly discovered facts in favour of old theories?”