Termites are social insects that live in warm areas of the world, and are characterised by the huge mounds that form their nests. Inside, millions of these small creatures – all of them deaf, blind and dumb and relying only on chemical means of communication – live in a precisely regulated world.

Central to the colony is the queen, an 8cm. long egg-laying machine that produces thousands each day. These hatch into workers, smaller forms that make up the vast majority of the colony. 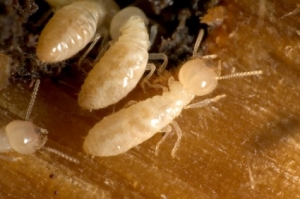 Termites are a very valuable source of food for other creatures, especially ants, which, being even smaller can access the narrow entrances to the nest and carry of defenceless workers.

But there is another group that has the sole duty of defending the nest. These “soldiers|” do this in a variety of ways. They have a large reinforced head of the same size as the entrances, and the soldier’s first defence is to use this head to block the passages. If the first soldier succumbs to the attack there is a line of others behind him ready to take up his position. 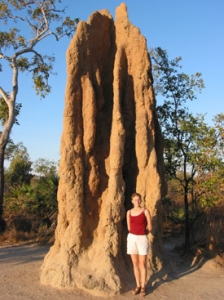 Should the enemy breach this defence more soldiers swarm to the site, each using an even more powerful weapon – two huge, razor-sharp jaws. These jaws are so big that normal feeding is impossible for the soldiers, and they only survive by being fed by the workers.

But there are more means of defence. About 10% of the body weight of the soldiers is comprised of special poisonous fluids. These are released on the invaders in a variety of ways. They can spray these poisons into the wounds caused by their powerful jaws, or they can brush them over the assailant’s body by using their upper lip. In extreme circumstances the soldier, in a supreme act of self-sacrifice, can burst his head, covering the attacking ant with this poison. The whole design of these little creatures is such that an accidental origin is impossible.

But probably the most amazing form of defence is that some of these poisons inhibit the clotting ability of the “blood” of the attacking ant. It is remarkable that such a small insect as an ant has a built-in way of sealing its wounds to prevent fluid loss – something common to us mammals. But for its opponent to have made a chemical that prevents this healing process, resulting in the attacker bleeding to death, is way beyond the possibility chance, as the evolutionists’ claim it to be. Termites are not chemists who could have consciously devised such a chemical, and the only explanation is that a greater intelligence is at work: