In fourteen hundred and ninety-two,
Columbus sailed the ocean blue…
The first American? No, not quite.
But Columbus was brave and he was bright…

August 3 1492, to be precise. That was the day Columbus embarked from Spain on his epic voyage across the Atlantic to discover the ’New World’, and write himself into the pages of American history.

But August 3 1492 was also notable for something else. It was the date when all Jews in Spain (about 800,000 of them) were forced by law to convert to Catholicism or leave Spain, on pain of being arrested, tortured or killed. As a result thousands of Jews were driven from Spain, or suffered terrible persecution at the hands of the Spanish Inquisition.

Is there any connection between those two events?

There may well be.

Many historians now believe that Columbus was a ‘marrano’, a secret Jew. Study of his surviving letters and diaries show that he wrote and spoke in Ladino, the ‘Yiddish’ of 15th Century Spanish Jews.

His letters to his son Diego each carry in the top left-hand corner the Hebrew letters bet-hei, meaning b’ezrat Hashem (‘with God’s help’), a blessing commonly used by observant Jews – an equivalent perhaps of ‘God willing’ in a Christian culture. The provisions of his will imply a very strong Jewish connection.

It has been suggested that the motivation for his voyages was in part the desire to find a ‘safe haven’ for his Jewish brethren, where they could flourish free from the horrors of the Inquisition. 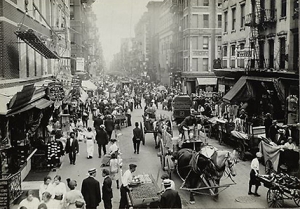 Persecution of the Jews has been a recurring stain on European history. The tyranny of the Spanish Inquisition pales beside the repeated ‘pogroms’ of the early 20th Century in Eastern Europe. A ‘safe haven’ was still required – and between 1880 and 1914 around 2 million European Jews found it in the ‘New World’ of America.

Columbus’ hope was fulfilled in a way he could not possibly have imagined.

Today, as the generation that experienced the Holocaust slowly disappears, the two thousand year old dream of the Jewish people appears to have been realised – a state of their own, where they can pursue their own hopes, religion and culture.

Yet still the search for peace and security goes on.

It was a decisive factor in the 2015 Israeli elections, and it has provoked a serious rift between Israel and her long-time supporter, the USA, as Israel tries to control the threat to her existence from a long-standing and powerful enemy, Iran.

There is a solution – ‘with God’s help’.

The hopes of Jews and Christians come together in the vision of the Old Testament prophets, who looked forward to a time of absolute peace for both Israel and the world, when the Jews will experience a spiritual reawakening, recognise their Messiah and live in peace under his righteous rule:

“He shall judge between many peoples, and shall decide for strong nations far away; and they shall beat their swords into ploughshares, and their spears into pruning hooks …And he shall stand and shepherd his flock in the strength of the Lord, in the majesty of the name of the Lord his God. And they shall dwell secure, for now he shall be great to the ends of the earth. And he shall be their peace.”  (Micah 4.3, 5.4–5 ESV)